The History of Redemption Singapore Conference_20161010 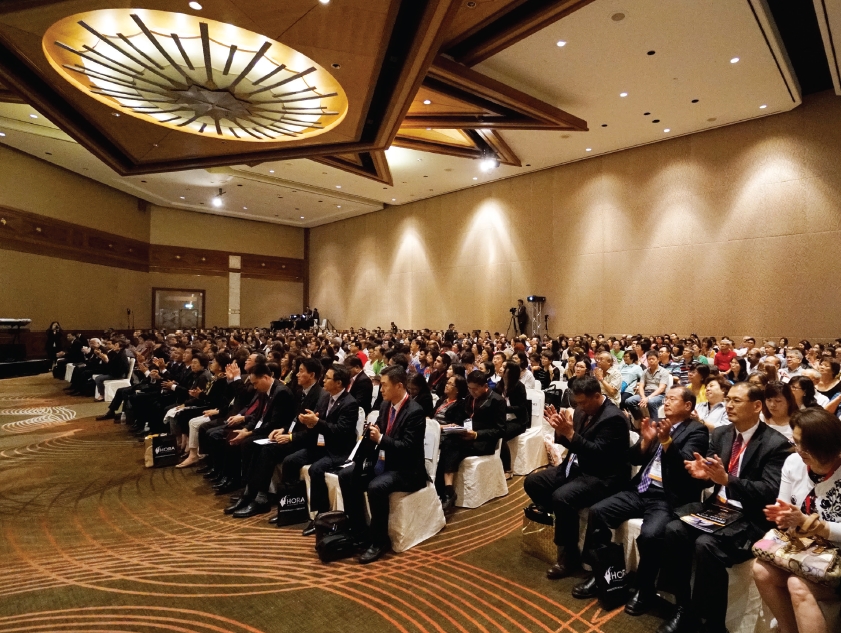 The first History of Redemption seminar held by HORA took place in Singapore on December 10, 2016. The scene of the conference was broadcasted live on Youtube all over the world which allowed people, including the Pyungkang saints, to view it live. The conference was held in English, the official international language, with the theme, “Jesus Christ’s Genealogy from Adam to Christ.” We interviewed Rev. Samuel Kim, from Singapore Zion Church, and Rev. Andrew Pak, from New York Evergreen Presbyterian Church, who prepared this conference.

What is the significance of the conference that was held this past December?
This was the launching conference of HORA. Our plan is to have a large-scale conference every year around the world and decided that we would start in Singapore. The official title of the event was “World-Class Seminar: The History of Redemption Singapore Conference.” We created a homepage beforehand and required advanced reservations with a fee of $15. During the introduction of the conference, Rev. Samuel Kim explained the flow of the History of Redemption series, from first to the ninth book, and introduced the author. He made that connection to the books and not let it end with only listening to the lectures. Many people actually purchased books after the conference.

Last January, we had decided to hold the first conference in Singapore, and planning that with faith, the church in Singapore reserved the Raffles City Convention Centre that could hold up to 900 people. The problem was how a church with 100 people could gather a crowd of nine hundred. One individual listened to a sermon during Wednesday Service at Singapore Zion Church, and gathered many other church leaders, saying the Word given at this church was one many person needed to hear. It turned out that the person had many connections in the religious circles of Singapore.

After that, we established the History of Redemption Academy for Laymen, had workshops with other leaders of large churches, held lectures at YMCA, and visited theological seminaries, and the Word of redemptive history started to spread out in the religious circles of Singapore. The conference held in December was the climax of spreading the Word of redemptive history in Singapore. Only 20% of the population in Singapore is Christian, but a thousand people came that day, which means one Christian from every hundred attended.

We heard that it seemed all their hearts were on fire.
We saw 2,000 twinkling eyes. There was not a single person that left during the four-hour event, which included the 40-minute introduction of the History of Redemption series and its author, the 1.5-hour lectures each by Rev. Paul Kim from Green Hill Church in Orlando and by Rev. Philip Lee. After the conference, we were flooded with responses such as, “It’s the first time I’ve been to a conference of this high of a quality and scale,” “How can we learn more?” “Please come to our church to teach our leaders.” Many of the third, fourth, and fifth books of the History of Redemption series were sold after the seminar, as people had already received the first and second books from our saints, or have already purchased it on their own and studied it.

The saints must have put in a lot of effort and work.
There were only 200 people who had registered online, even up to just a month before the conference. We had such a long way to go. The saints held special dawn services and participated in 40-day fasting and prayer. The churches in Indonesia, Shanghai and Malaysia also prayed and fasted. They even came to Singapore to help out with the event on the day of the conference. We put up advertisements in newspapers and bus stops and distributed thousands of flyers, running around to the point there were people in various parts of the city that would say, “I have already received this.”

However, we cannot say we are the ones who did it. The work of the Holy Spirit led us in each step of the process.

The trumpet of redemptive history is sounding powerfully all over the world, and nations are coming to gather. The saints of Pyungkang must prepare to greet the members of Abraham’s family in 2017.

For I know their works and their thoughts; the time is coming to gather all nations and tongues. And they shall come and see My glory. (Isa 66:18)

Prev Let's Go to the Scene of Thailand's History of ...